This weekend we celebrated my baby girl's 8th birthday. I feel like she is still 3, but her birth certificate says otherwise.

Even though the birthday festivities were stretched out over two days, we kept it low key. Day 1 we took her and her two best friends to Launch, an indoor trampoline park. We had a great time and then came back for some cake and ice cream. The end. Easy yet fun.


Day 2 we had a small family party with grandparents and her cousins. Of course I didn't take picture because I was too busy getting everything together (I'll never remember), but we had a make your own sandwich bar, cupcakes, and homemade ice cream sandwiches for dessert. I made giant cupcake shaped sugar cookies for favors.


Due to my lack of photo documentation I will share a food that was a big hit. These are delicious! You are missing out big time if you don't try these. Thank you to the inventor. I found these on Fullflavorfood.com.

Little known fact: I write for 2 other blogs. One is for a home care company and the other is for my dad's furniture business, Flat River Furniture. I enjoy writing and it keeps me busy. I'm also hoping one day it can be a little more than a hobby, but for now I write just for the sake of writing.

Tonight I wrote about family game night for Flat River Furniture and since I love game night I thought I would double dip and share it here too.

We love family game night. Monopoly, Clue, cards, Yahtzee, Life, etc. It's a fun relaxed time to get together and have some laughs while beating your loved ones.
It is also a low cost option for something to do together rather than go out to a movie, for example, which seems to cost more every time you walk through the door. This evening of bonding costs only the price of a board game (if you don't have one already, which you probably do) and maybe a pizza. Pizza is usually mandatory with this crew. Best of all, everyone can be included. Many games are suitable for a wide age range.Go grab some family and a pile of games and get to it! 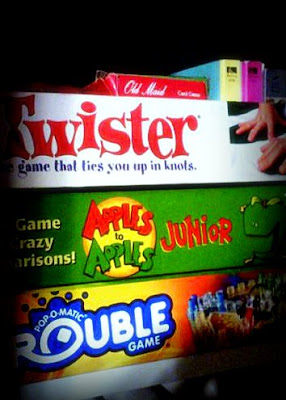 Nice weather is coming and the daylight is lasting longer. Bring game night outside! We like this tree stump checkerboard. By using pebbles you never have to worry about loosing the pieces. 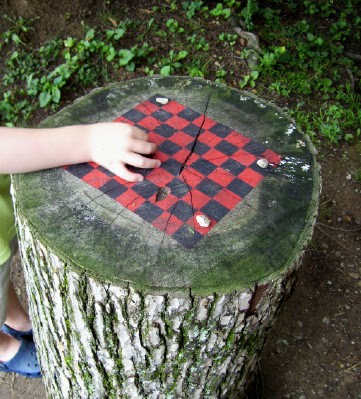 What is your favorite game to play?
Posted by Victoria Walsh at 7:04 PM No comments:

I was so excited to see these mini irises popping up in my garden that I grabbed the rake and started cleaning all the leaves and mess out of the gardens and prettying up the yard. Its amazing how good a nice day after a long winter makes you feel.
Posted by Victoria Walsh at 5:28 PM No comments:

Yesterday's lunch was probably the best idea I have ever had. I invited my lovely cousin, who is a new fellow Pinterest addict, over for lunch. We each chose items we had pinned on the site and wanted to try.

Start off with these barbeque asian wonton tacos. Very easy and super delish. I was actually surprised how good they tasted with mixing the sesame ginger dressing flavor with bbq sauce. It's also a healthy taco option.

Eat this on the side. Best cooked broccoli I have ever eaten. Hats off to My San Francisco Kitchen for this one.

Lastly, wash it all down with some strawberry lemonade. Warning: Though this is well worth it, it took a while to figure out the right straining method for the fruit pulp. We recommend using a collendar and draining it into a big bowl first, before putting it in the pitcher. It is way better than any store bought lemonade and healthier too since you can control the amount of sugar you put in it. Or use honey as Laylita suggests. So pretty too with lemon slices and cut strawberries mixed it.

If you have a ton of recipes on Pinterest that you want to try, but just haven't gotten around too... Or if your like me and are the only one in your house that will try it... call over a friend and have a Pinterest lunch. Happy eats!
Posted by Victoria Walsh at 9:01 AM No comments:

Yesterday morning on Instagram I joked that I was going to make the grandma look popular. I had on pink lipstick and mauve nail polish and a lace top. All things that remind me of my grandmothers, but in a great way. Check out the photo here. What you couldn't see was the bright coral skinny jeans I had on.

In all seriousness though I really like the lace trend, which is why it is slowly creeping into my closet one piece at a time. I think the next one should be these mint lace shorts at ustrendy.com. They are gorgeous.

Although trying a Forever 21 version costs half the price. Maybe one of each?

Either way I am enjoying the bright colors and pretty pastels this spring. Granted it is still winter here for a couple more weeks, but I have started bringing out the spring shades just to boost my mood. This is actually pretty strange for me because usually I am not a colorful gal. I guess I'm being converted this year to the world of color.

I also started loving pink lipstick and I never used to wear lipstick. What is this world coming to? Maybe its because I finally found one that doesn't look strange with my pale complexion.

I'm a fan of Blake's hot pink lip in the photo below.

Are there any looks your are unexpectedly loving lately?
Posted by Victoria Walsh at 11:18 AM No comments:

During my hiatus I have grown a big love for smoothies. The ones that are made at home have a lot of nutrients, and calcium if they are milk based. They are super easy to make and I like that they help keep me full in the morning. I probably wouldn't drink one as a replacement for breakfast, since I'm a person that needs substance to keep me going until lunch, but it definitely is a great addition instead of sugary juice. That's another benefit - a whole lot of flavor minus the sugar. My daughter enjoys them too, which makes me feel good about feeding her something tasty and healthy.

So far my two favorites are the Peanut Butter and Banana Smoothie form FitnessMagazine.com and Dr. Oz's Anti-Cancer Banana Berry Breakfast Shake. Both are milk based and obviously I have a banana theme going on. I am posting the recipe for the the berry breakfast shake below. It tastes good, but I also like the idea that it could potentially prevent cancer due to the anthocyanins in the berries and the calcium in the milk.

Directions
In a blender, combine all ingredients except cinnamon. Blend 20 seconds or more until smooth. Pour into glasses and garnish with a sprinkle of ground cinnamon.

If you don't have almond extract, don't worry about it. I didn't either and it still works. Also, I have made it by freezing the banana ahead of time and not. If you don't remember (or don't want to wait), just throw a few ice cubes in the blender with the ingredients.

Posted by Victoria Walsh at 7:59 AM No comments:

It is January. That means I have to start thinking about my daughter's birthday in March. This is obvious to me, but maybe no so much to my husband. She also has her first communion this spring... yet another thing to plan!

Because of the two upcoming parties we are trying to keep the birthday celebration smaller. Even though I try every year, somehow it always seems to be a 40 person event. Matt calls them the birthday extravaganzas. Can I help it if I think my girlie deserves to have every birthday be wonderful and memorable? I only have one kid to spoil after all. And clearly too much time on my hands.

We always like to talk about birthdays around here, so admittedly January is not really the first time I've thought about it. Morgan and I came up with a fun idea for a glamping party a while back. Glamping - Glamorous Camping. The brainstorm session started out as bringing a tent inside the house and having her friends sleep over. Then it started to get sparkly and girly, thus the glamorous part.

After we realized this girl would be getting 2 parties this year, I am kind of second guessing the idea since she will want to invite all her friends and family over too and it will snowball into to 40 people crammed into my house scenario again. We will probably end up going to do something fun (trampoline park, movies, bowling) with one or two friends and have a family dinner to keep it low key, but I am still in love with the glamping idea. I hope I can still find a low cost way to merge it all.

Here are a few bits of inspiration for a glamping party that I have found along the way:

Top to Bottom:
1. Making personalize pillowcases would be a fun craft for the girls to do at the party.
2. Campfire cake anyone?
3. What camping experience is complete without smores? Cute favor.
4. I love the color pallet for this glamping party showcases on Hotess with the Mostess!
Posted by Victoria Walsh at 5:29 PM No comments:

Victoria Walsh
Welcome! I am Victoria and this is my blog about life, celebrations, projects and just about anything else that sparks an interest with me. I am a wife, mother of one, and currently a substitute teacher. I enjoy spending time with my family and being creative.

Want to tag along?

Get it in your inbox!